Our group on one of the many suspension bridges that crossed creeks, rivers, small canyons on our hike

I had been hearing about New Zealand as a unique and special place for years, and without much expectation, hoped one day to visit.  When I saw that the National Outdoor Leadership School, who I have been working with and for for 15 years had an alumni course hike in New Zealand, I said, “Here’s my chance!” and jumped on it and signed up to fly halfway around the world and finally visit New Zealand.

I gave myself a few days in NZ on either end of the 6 day hike so that I could see a bit more of of the country than simply the trail and the mountains.  The whole experience was special, and what I had planned to be my one visit to New Zealand before I quit travelling, turned into what I hope will be my first visit to New Zealand.  I plan to return.

I only got to see a bit of New Zealand, but enough to give me some impressions that I think hold water.  I will summarize my trip in the two parts of how I experienced New Zealand:  The Hike, and My Impressions of New Zealand.

THE HIKE WAS AWESOME:  We hiked the Heaphy Track, the longest of the ten Great Walks New Zealand advertises.  It is in the North West corner of the South Island in the Kahurangi national park, in what is called in New Zealand the “Southern Alps.”   The trail was supposedly built on an old Maori trail that led from Golden Bay to the mouth of the Heaphy river.  The hike was challenging enough to be interesting, the setting was truly wonderful, we had pretty comfortable digs at night, good food, great company, and not too long.  Pretty awesome trip!

The trails were in great condition and we hiked through 6 ecological zones. 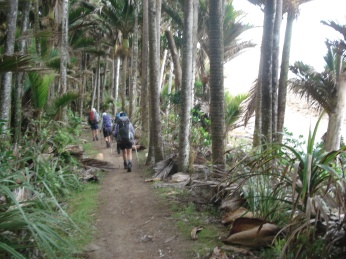 Our final day was a 10 milie hike along the coast – pristine beaches bordered by pristine jungle.

Another great view of part of the trail along the coast on our last day to finish our trek.

WHAT IMPRESSED ME ABOUT NEW ZEALAND.  Half of my stay in NZ was before and after the hike when I was able to spend a few days each in Christchurch and Nelson. I also had a few long drives through the country-side during my stay which gave me some additional perspectives.  Here are my impressions.

Also, there is no custom of tipping and the service I got was great.   It was awkward when I wanted to leave a tip – kinda like offering to tip your neighbor for giving you a hand with carrying in the groceries.  There’s no spot on the credit card bill for a tip. When I asked how to express my appreciation for great service, the waiter told me, “Just say thank you.”  How un-American!