The text of this essay appears in the current edition of the NSW Ethos Magazine, an only slightly edited version of what appears below. For the link to the full issue of Ethos, go to NSW Ethos:
——————————————
We see a lot of chatter in the media about the deterioration of ethics and character in business, the military, and society in general. In response, we are (naturally) seeing a proliferation of “ethics training” sessions in which we are told to follow rules, be a good person, and “just do the right thing.” And in the process, the subject of “ethics” has lost a lot of its impact.

The newspapers, the evening news, indeed the Navy Times are full of stories of successful, intelligent people who certainly had heard many times, “just do the right thing,” but who did the wrong thing anyway. Would these people have done better had they attended another class or lecture on ethics, reminding them to choose the “hard right, instead of the easy wrong,” or not to do anything they wouldn’t want to read about in the Washington Post?

I somehow don’t think so. Most moral failures are made by people who “knew” that they were not doing “the right thing.” It is uninteresting to discuss the morality of violating the rules of our organization, our culture, or the laws of our community for personal advantage. More interesting are cases in which one might put oneself at risk and break the rules in obedience to a higher law, or to benefit others who deserve special consideration. Then “doing the right thing” becomes indeed a more challenging proposition.

In fact, doing “the right thing” becomes more and more difficult the more responsibility one has. In many difficult situations, the right thing is unclear, and the best possible decision under the circumstances requires experience, judgment, and anguish. Simple bromides such as “just do the right thing” are not very helpful.

My good friend retired Army Colonel and leadership professor Dr. George Reed, was recently invited to lead a discussion with newly selected Army Brigadier Generals, with the intent of getting them to think about the complex world of ethics as a general officer. However, the course planners who invited him suggested that “ethics” not be in the title of his session. He was encouraged instead to focus on the corrupting influence of power. With that as a title, George was able to lead a very engaged and at times energetic discussion, essentially about ethical trade-offs that often confront general officers.

It would seem that generals, admirals, senior officers, senior enlisted – people who have made the military a career and profession – don’t need to be told the rules and threatened with the consequences of not following them. That said, we continue to read about cases where senior leaders either commit spontaneous acts of stupidity, or pursue a personal agenda in violation of institutional and cultural values.

What to do about it? There is no easy answer, but I am concerned that more uninteresting ethics training may well create more resentment and cynicism toward ethics. Traditional carrot-and-stick approaches to ethics training tend to speak to those on the bottom end of the moral development hierarchy – those for whom nearly every “ethical” decision is a simple risk-reward calculation. While this approach might be appropriate for some at every level in the chain of command, most professionals feel insulted when treated like children.

Perhaps ethics training should be recast as simply “learning the rules.” We all need to know them. And for the risk-reward calculators, the training needs to include the costs to themselves and others of breaking them. Ethics education on the other hand, goes deeper and seeks to understand the rules, their origins, intent, and limitations. Ethics education focuses more on values and context than on rules, and teaches how to reason through situations and circumstances that rule makers may not have envisioned.

Values are the “commander’s intent” behind rules. Indeed sometimes it is more ethical to break rules than to follow them, since rules cannot anticipate every circumstance. Ethics education discusses dilemmas where rules don’t provide clear guidance, but clarity in values and seasoned judgment are required to make the best decision. Good ethics education forces you to struggle with dilemmas in situations where, after having made your best call, you’re still struggling, because tough decisions have costs and downsides that are hard to measure and anticipate. Tough ethical decisions are usually between two (or more) competing ‘goods’ – or even tougher, between a number of bad options.

Admiral Stockdale spent seven years as a prisoner of war having his values tested to the limit, and found that his education in ethics in graduate school gave him tools that helped him survive and lead in the most demanding of conditions. Accordingly, when he later became the president of the Naval War College, he initiated and taught a course entitled The Foundations of Moral Obligation, which after over 30 years, remains one of the most popular electives at the Naval War College. At the Naval Academy, Shannon French initiated a course entitled Code of the Warrior (based on her book of the same name) that explores warrior values and ethics through the ages and in many cultures. After ten years the course is over-subscribed every semester, and the Naval Academy has been unable to meet demand. Notice that “ethics” is in neither of these titles. Ethics education CAN be inspiring, and have a valuable and values-reinforcing impact on professional warriors, if it is done well.

“Ethics” is such a broad and fascinating subject; it is a shame that it has been trivialized to mean mere compliance with regulations and rule-following. Perhaps “ethics training” should instead be called “Know the rules and follow them.” “Ethics education” on the other hand, should examine personal, organizational, and societal values, and explore potential tensions between them. Combat ethics education should seek to understand the intent and ‘why’ behind ROE, and why warriors are expected to assume risk (how much?) in the interest of values beyond tactical victory. Combat ethics education should prepare warriors for the challenges of balancing obligations to troops and mission, against obligations to non-combatants, to societal values, and even to our enemies who, after all are human, and will remain so, after the fighting is done. That is not boring, but it can be controversial. 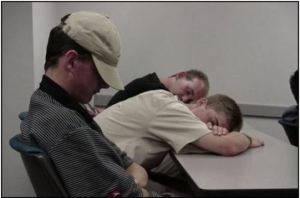 Typical Ethics Training
Let’s ‘Do the Right Thing’ and liven it up a bit….

5 thoughts on “How “Ethics” has become boring”