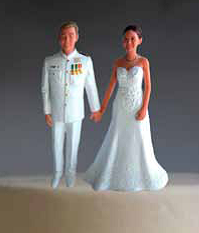 The below is an essay recently published in the Naval Special Warfare Magazine Ethos, available on-line.  They had asked me to write something about ‘The Family’ and this is what I came up with.   I heard Radm Dixon Smith, Commander Naval Region Southwest, use the “Fighter, Family, Fleet” alliteration in a speech, and he tells me it is being used in broader contexts in the Navy.   I had independantly come up with the “Warrior, Family, Navy,” but changed the title to fit what the Navy is already using – and yes, sailors are pretty good with ‘F’ words.  I stayed with “Warrior, Family, Navy” however, in most of the text.   Ménage a trois as a reference to a wine is somewhat tongue in cheek.

Call it what you will – a ménage a trois, a three legged stool, a harmonic trio, a powerful triumvirate.  The point of this essay is that success for the Fighter, the Family, and the Fleet/ Navy demands that they collaborate as a team, and each must make sacrifices to make the team work.  I have found it useful to think of this three-way relationship as a ‘ménage a trois.’   ‘Ménage’ is French for household and ‘trois’ is three – you may know ‘Ménage a Trois’ as the popular wine that is a wonderful blend of Cabernet, Merlot, and Shiraz.  For our purposes, the Fighter , the Family (particularly the spouse) and the Fleet (meaning the Navy) must work together for the benefit of each and the whole.  If they work at cross purposes or compete with each other, each for their own advantage at the expense of the others, everyone loses.

Increasing Naval Special Warfare (NSW) commitments around the world has increased the stress on our warriors and their families, resulting in less effective warriors, retention shortfalls, broken marriages, and children who have to endure not only having their warrior parent away, but also tension and stress in the family when the warrior is home.

In some ways, not only our enemies but also our families have become victims of our operational successes.

Managing that stress requires communication, teamwork, and collaboration.  We’ve all seen the ménage crack and break up –it is painful to watch.    But we also know colleagues who make it work.  They excel in the field or in the Team, while at home their families thrive. How do they do it? For this ménage a trois to work, each member has an important role to play – it is truly a three-way relationship.

The role of the ‘Fighter’ – the warrior.  I recall as a Commanding Officer calling an outstanding young SEAL into my office to talk about the 60-70 hours he was working every week, and the 75 days of leave he had on the books.  I tried to encourage him to back off a bit, and to take some leave with his family. He politely and professionally told me to mind my own business.   Not many years later, I was saddened but not surprised to learn that he was divorced and his kids were struggling and in trouble.  Our warriors get important psychic rewards from the respect of their peers, and they are driven by the desire to excel as special operators.  And yet, while holding on to that ideal, most choose to get married and have families. They aspire to be good husbands and fathers, but soon realize (or are reminded by their spouses) that this new role as husband and father has responsibilities that frequently require compromising some of their focus on their professional ideal.   The family man/warrior eventually has to turn down or postpone great professional opportunities, in order to put essential time and energy into their marriage, taking care of the kids or doing work around the house.    Every senior NSW leader I know has had to bite his tongue when accosted by an angry spouse for making her husband go on yet another exercise, training event, or deployment, when the leader knows that her husband literally begged to go on that trip.  The warrior is a player in this ménage – he is not merely a passive victim, responding to demands made by the other two players.

The role of the Family and spouse.  We have to assume that the spouse knew that she was marrying someone who either was, or aspired to be, a SEAL or SWCC warrior.  It is no secret that the Navy makes heavy demands on its sailors and their families, and spouses by and large are reconciled to that.  On the other hand, many of us have known spouses who have bitterly resented the Navy, and/or the Teams for the demands that they have made on their families, and (sometimes) for the seemingly adolescent, fun-with-the-boys behavior that ‘the brotherhood’ may bring out in their husbands.     When the spouse is not reconciled to the culture of the Navy or the Teams, it puts significant stress on the marriage, and on the life and professional work of the warrior.  For this ménage to work, the spouse must willingly accept and become friends with that other key player in the warrior’s life – the Navy and the Teams.  Though it may sometimes be difficult, the spouse must try to appreciate the positive sides of the Navy/Teams culture, and accept that there will be sacrifices, as well as rewards.  As one NSW spouse put it to me, “When the spouses feel embraced and respected by the community, they are more likely to make the necessary sacrifices with more pride, and LESS resentment.”

The role of the ‘Fleet’ – the Navy.   The Navy is the 900 pound gorilla in this ménage.  It has been struggling for decades to find the proper balance between using its authority to meet ‘the needs of the Navy,’ and letting some of its objectives slide to support the needs of the family.  Navy and NSW leaders know that they can only draw so much on the good will of the warrior and the family – until the good will and dedication ‘account’ gets dangerously low.    Warriors and their families see their Commanding Officer and Command Master Chief, and Platoon Commander and Platoon Chief, as Navy representatives, since it is they who communicate larger Navy and NSW leadership policy to warriors and families.   These leaders are also closest to the warrior-family connection in the ménage, and must communicate warrior and family concerns to the Navy and NSW leadership.   Navy/NSW leaders must pay attention to these concerns, while continuing to fight for the manning and resources to permit a sustainable optempo.

Obviously, it is important to have a loving, trusting, and compassionate relationship between the warrior and his spouse and family, but addressing that is beyond the scope of this essay.  However, the other key player in the ménage a trois, the Navy, clearly has a role to play in how well that warrior-family relationship functions and evolves.  When the team works well, and all three players are doing their part and collaborating toward the success of each and all, we have three strong players and a whole that is more than the sum of its parts.

6 thoughts on “The Fighter, the Family, the Fleet – a Fragile “Ménage a Trois””